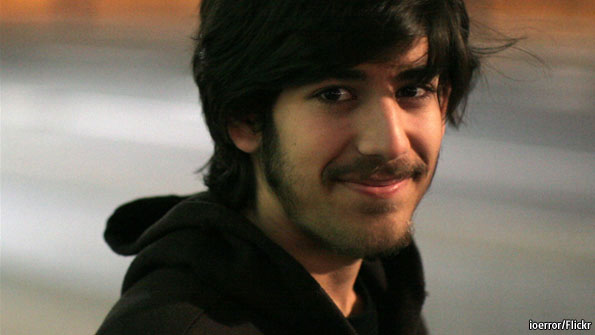 It is terribly sad when anyone commits suicide. Aaron Swartz, the genius who created RSS, helped make Reddit.com, and more, took his own life on January 11, 2013. He was a mere 26 years old. His life was a mix of fabulous successes, but also mental illness and misery.

The Economist gave Swartz quite the send-off. The cover of the magazine calls him a “data liberator,” and the obituary itself said that what he really wanted was to “liberate information…. He wanted a world that was better, freer and more progressive.”

Mmmm-hmm. One wonders if the Economist would have been so compassionate if Swartz had hacked their website weekly and given away the entire contents of the magazine. The Economist’s business model is greatly predicated on subscribers paying a pretty penny for it (as is the case with the Wall Street Journal.)

Swartz’s hacking and republishing in the name of “liberating information” took money from the pockets of content producers, many of whom are struggling to survive. He hacked the not-for-profit JSTOR, which holds articles from academic journals;* he hacked the Library of Congress (where I work).  Apparently, researchers, writers, and those who toil to create or publish text do not deserve remuneration for their work. How they are supposed to pay the bills is less than clear.

Again, it is terrible that Aaron Swartz suffered as he did. But, please—let’s not forget he was a man who thieved in the name of ideology.

Addendum: Whether the U.S. government’s case against Swartz was correct or excessive—I take no position on this. I simply do not know enough to voice an informed opinion. My point in this blog post is to simply point out the disjunction between the business model of the Economist and its obituary.

*Weirdly, Dr. Edward Tufte, who has made boku bucks from his academic books, said the hacking of JSTOR should be celebrated: http://danwin.com/2013/01/edward-tufte-aaron-swartz-marvelously-different/